Communicating with participants and coaches

An important part of officiating is good communication. The official’s communication with participants and others is undertaken in a range of ways which include:

There are times when the official needs to take an assertive approach to a situation eg. when the game is getting ‘hot’, or when a participant is questioning a decision in a demonstrative manner.  At other times, the official will use a less assertive and calm approach eg. when the competition is being conducted in a good spirit.

Voice is used by the official in a range of settings:

Often the whistle is used to intervene within the competition:

Indications/signals are used to convey a message to participants, coaches and spectators at sporting competitions:

As a general rule, communication will be most effective for everyone when the official uses more than one method of communication to convey a message eg. verbal and a visual signal (flag)

It is often said that how an official ‘sells’ their decision is the most important thing.  Participants and coaches are looking for an official that communicates in a confident and decisive manner. This shows a person in control of themselves and the competition. The contrary style conveys uncertainty. A confident and decisive verbal communication style includes the official using:

There are times on competition day when the participant or coach has a request of the official. This might be prior to a competition, for example, seeking some information regarding the rules/laws, or a participant not happy with a decision during the competition. When participants or coaches approach an official with a problem or query, it provides an opportunity to engage in discussion and seek a greater understanding of each others position, views and understandings.

The strongest influence on the outcome of all communications is the ability to listen effectively. When the official listens effectively, they can respond appropriately. Listening enables the official to put meaning to the sounds they hear. Listening is the ability to receive, attend to, interpret and respond to verbal messages and other cues, like body language, in ways that are appropriate to the purpose.

An important task of many officials is to complete a report after the competition. Written and oral communications provide messages, instructions, information and feedback to a wide range of people in the sporting environment.

Each sport usually has their own paperwork which is distributed to the officials prior to the competition for completion. The accuracy, timeliness and legibility of completed reports are paramount if receivers of the report are to make any sense of it. From time to time officials will be required to present verbal reports. This could be to:

It is essential that the official ensures that what is reported is honest, respectful, trustworthy and that the report is delivered with integrity.

Conflict is likely to arise in a number of situations. These include:

There are occasions when conflict in the sporting environment is inevitable, however developing strategies to minimise conflict from arising is vital. The following tips may assist officials’.

Prevention is always better than cure!  If action is taken early in the game, conflict is less likely to occur
Make competitors aware of your presence by reacting immediately to rule infringements (when appropriate)
Remain objective, no matter what prior knowledge of participants/teams an official has.
Be definite and firm with decisions and communication
Look sharp and act sharp - this will gain respect as an official
Don’t take criticisms personally. Remember that coaches and participants are seeing the game from a different perspective to the officials
At the beginning of the competition, provide structure and guidance, but also start a dialogue with the participants. Acknowledge the participant’s abilities and experience, and invite constructive viewpoints from some participants
Speak clearly and firmly in heated situations. This will indicate confidence in managing the situation
Keep cool - if it starts to get a bit hot …

The official is often called upon to manage conflict situations and attempt to resolve them. It is virtually impossible for sports officials to avoid dealing with conflict, even when they have implemented prevention strategies.

Be professional: Speak clearly and stay composed in heated situations. This demonstrates confidence in managing the situation. Avoid argument or debate, and don’t try to bluff through with unjustified rulings.

Address the problem - not the emotions: Try to put aside the emotions of all parties. Emotions inevitably inflame the situation. By dealing with the facts and the available evidence, the official is more likely to be seen as making a fair and appropriate decision.

Focus on the person: People are not objects, and they don’t like being treated as such. Acknowledge a participant with eye contact and use their name if possible.  Recognise that they have something to say, and don’t just dismiss them.

Be fair: Avoid team or individual bias at all costs. Demonstrating integrity is one of the greatest assets of an official.

Be confident and open: Don’t be defensive or try to justify actions. Clarify decisions when appropriate, based on the facts and the evidence presented.

Be firm: Deal with unacceptable behaviour firmly and quickly.  Set boundaries in a polite, professional and assertive manner.

Remember that 90% of conflict occurs not because of what was said, but the tone in which it was said! 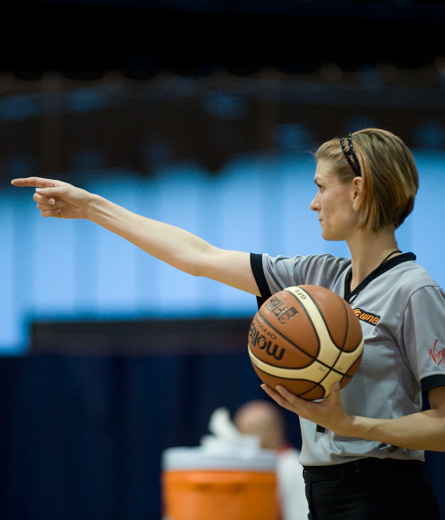